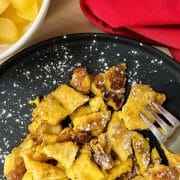 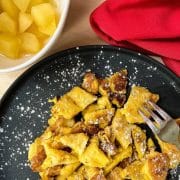 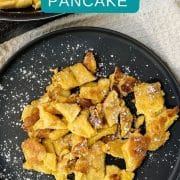 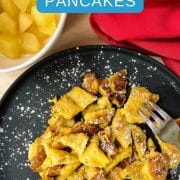 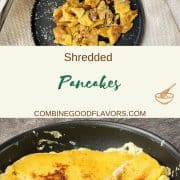 This article is also available in German.

This easy Kaiserschmarrn recipe is made without raisins in under an hour. Its fluffy texture and sweet taste will make your heart beat faster!

You can prepare torn pancakes in their traditional version, with raisins added to the thick pancake batter. Fry them in a pan, and then cut into pieces or, just as they are called, torn apart and served dusted with powdered sugar.

The traditional Austrian dish is famous as a sweet main course or as a dessert. Those who visited Austria may have tried this treat at least once.

See the recipe card for quantities.

First of all, separate the eggs into two large mixing bowls. First, pick up the mixing bowl with the egg yolks and add the milk, a pinch of salt, and sugar.

Mix the ingredients until they form a thick mixture.

Now sprinkle in the flour, constantly stirring until a dough mixture forms. If the dough becomes too thick, you can stretch it by adding milk. However, if the dough is too thin, add a little flour.

Now beat the egg whites in the second separate bowl until stiff, and then fold them into the dough mixture.

Now it's time to pan-fry the dough. You will need two large frying pans for the amount of batter. Put a tablespoon of butter or oil in each pan and let it get hot.

Divide the batter evenly between the two pans and fry over medium heat. Be careful not to turn the heat up too hot, or your emperor's pancake will burn and won't taste good.

Once the dough is golden brown on the bottom, divide the pancake into quarters and turn them over in the pan.

Fry the dough in a hot pan.

Divide the pancake into quarters.

Flip over - one after the other.

Fry the other side until it is golden brown.

Now fry the other side until it is golden brown, and pull the dough into bite-sized pieces.

Pull the dough into bite-sized pieces.

Stir the scrambled pancakes a few more times to ensure that all the pieces are golden brown.

Sprinkle some powdered sugar over the Kaiserschmarrn in the pan and let it caramelize.

Divide the finished Schmarrn onto plates and sprinkle with powdered sugar. And you're done! Serve this traditional Austrian delicacy with apple compote (Zwetschgenröster - aka roasted plums, or apricot compote).

That is before you whip the egg whites and fold them into the batter.

Kaiserschmarrn can be stored in the refrigerator for one to two days, packed in an airtight container.

You can also freeze the shredded pancakes. Let it cool entirely after frying (without sprinkling it with powdered sugar) and put them in a Ziplock bag. Let the air out as much as possible and freeze afterward. This way, the delicious Kaiserschmarrn will keep for several months. It loses a tad of its fluffiness by freezing but is still very tasty.

Since my husband is not a friend of raisins, but my daughter loves them, I always sprinkle raisins over my daughter's finished Kaiserschmarrn before serving.

Thus, my husband does not have to eat them, and my daughter is happy because she gets her beloved dried grapes!

Why is It Called Kaiserschmarrn?

The name Kaiserschmarren is made up of the words Kaiser and Schmarren. Schmarren is also a colloquial expression that in Austrian and Bavarian means a trifle, a mishmash, a mess, a garbage or a nonsense. The word "Schmarren" is related to Scharren (to scrape) and schmieren (to smear).
Course: Wikipedia

Is Kaiserschmarrn Austrian or German?

Kaiserschmarrn originates in Austria but can also be found in Germany or the German-speaking part of Switzerland.

What is the History of Kaiserschmarrn?

It is generally agreed that the dish was first prepared for the Austrian Emperor Francis Joseph I (1830–1916). There are several stories. One apocryphal story involves the Emperor and his wife, Elisabeth of Bavaria, of the House of Wittelsbach. Obsessed with maintaining a minimal waistline, the Empress Elisabeth directed the royal chef to prepare only light desserts for her, much to the consternation and annoyance of her notoriously austere husband. Upon being presented with the chef's confection, she found it too rich and refused to eat it. The exasperated Francis Joseph quipped, “Now let me see what 'Schmarren' our chef has cooked up.” It apparently met his approval as he finished his and even his wife's serving.
Another story is that Francis Joseph and his wife were traveling the Alps and stopped by a farmer's home for lunch. The farmer was so nervous that he threw all the fanciest ingredients he had into a pan to make a delicious pancake; worse yet, due to his nervousness and shaky hands he scrambled the pancake. Hoping to cover up the mess he then covered it with plum jam. Luckily, the Kaiser thought it was delicious.
Another popular tale is that his wife was a poor cook and couldn't flip a pancake efficiently. She decided to play to her strengths and shred the pancakes altogether and would serve them up to the Kaiser on a regular basis with jam. He liked them with jam. It was his favorite dessert.
Source: Wikipedia

What is Kaiserschmarrn served with?

If you make this recipe, let me know how you liked it by ★★★★★ star rating it and leaving a comment below. This would be awesome! You can also follow me on Pinterest or Instagram and share your creation with me. Just tag me @combinegoodflavors and hashtag #combinegoodflavors, so I don't miss it.

Please note that all my recipes are developed and tested in metric grams. I recommend using digital scales for more accurate results. I provided a conversion to US customary in the recipe, but please note that I haven't tested it using this method.

I'm eggcited to hear from you! Cancel reply